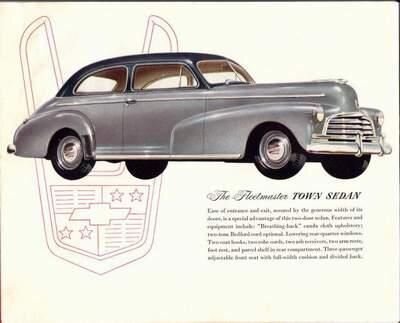 The Fleetline was introduced late in the 1941 model year as a four-door sedan only. In 1942, a fastback two-door “Aerosedan” was also offered while the sedan was renamed “Sport Master”. In 1947, the Fleetline made up 71.26% of Chevrolet’s sales. For the years’ 1949 through 1952 models, the fastback was the only one offered and Chevrolet dropped the Fleetline for 1953. Production was indefinitely delayed in 1942 due to World War II, after 110,000 has been made, though several thousand Chevrolet coupes and sedans were produced during the war years for military staff use. In 1945, production for civilians resumed. The original series was produced through 1948.

A redesigned Fleetline with reduced body contour and integrated rear fenders was offered for the 1949 through 1952 model years. It was referred to as a “fastback” because of its distinct sloping roof which extends through to the trunk lid. The Fleetline during the 1949 to 1950 years also has a lower look than a sedan, with the windshield being on inch shorter in height than a standard contemporary sedan. The 1949 to 1951 models were made in both four-door and two-door models, with only the lower portion of the doors being interchangeable with a sedan door. The Fleetline series is currently highly collectable. Many are made into street rods, with the common Chevrolet 350 small block V8 and the 350 or 400 turbo transmission being used.

We will be diagnosing a weak spark issue.

We have replaced the ignition coil and points.

We have done a valve adjustment.

We found cracks in the flywheel.

We have installed a new flywheel to the transmission.

The interior has been reassembled after working on it.