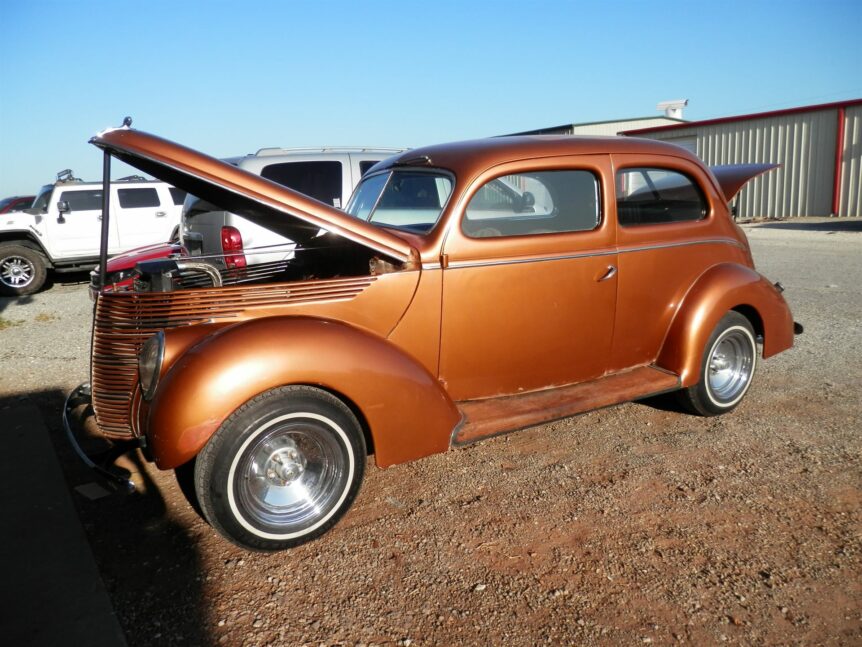 The 1938 recession hurt sales, as did Ford’s continuing of the 1937 cars, including most body panels. 1938 DeLuxe models were differentiated with a heart-shaped grille, though standard models retained the 1937 look. The fading Slantback sedan design was cancelled for good. Only a V8 was offered, either a 60 hp V8 or an 85 hp V8. A new dash was used, with recessed controls for safety.

The 1938 trucks were finally updated, having continued with 1935 looks. Changes included a vertical oval grille and substantial fenders and bumper.

The 1937 – 1940 generation of Fords is one of the most popular automobiles for hot rodding. Early stock car racing drivers also used Fords of this generation among other cars. This Ford also formed the basis for a style of dirt track racing car.

We will be diagnosing the steering column issue, along with installing power brakes, master cylinder and proportion valve.

We have removed the crossmember.

Click on the picture to see the details in each photo!

We have boxed in the frame.

Rear brakes have been removed and the new crossmember is being installed.

Click on the picture to see the details in each photo!

Power steering and disc brake conversion kit have been installed.